No more courthouse weddings in Florida

Did you know that here in Northwest Florida (Okaloosa County), the court houses are no longer performing marriage ceremonies?  Since the same sex law came into affect, allowing same sex marriages in Florida, the courthouse will only issue licenses... no more ceremonies.  So what is a couple to do?  That is where a notary public comes into play.
I have been performing weddings for 5 years now and usually they are on the beach or at a resort here.  Now I am getting calls for quick weddings, because the court will no longer do them.  I am trying to come up with a plan to accommodate these folks.  Since I am mobile, and don't have an "office", I am thinking of staging my dining room as a place to perform simple marriage ceremonies.  I don't know if this would go over and would love any feedback for any one that reads my blog.  What are your thoughts or suggestions on how to handle this new business opportunity.
Posted by Destin Notary / Officiant at 9:04 PM 1 comment:

Tomorrow is Thanksgiving Day here in the USA.  It is a time that most people get together with family and friends, eat some turkey and pie and for lots of folks - watch some football.  It is also a time that most stop to count their blessings and remind themselves what they are thankful for.

What am I thankful for?

I am thankful that I have the job of wedding officiant.  I get to meet some wonderful people and am part of one of the most special days in their lives.  It is not a job that I take lightly as I realize how important that ceremony is in people's lives.  It is an emotional time when you are committing to share your life with another person. I am thankful that people love each other enough to want to make that commitment.

I am thankful that some of the people that I have met have become friends and a lot of folks keep in touch, usually on Facebook.  Speaking of Facebook, I am thankful for Facebook.  Facebook allows me to share the joy of the weddings with people.   It also allows me to get to know couples before I actually get to meet them.  They get to see what I do and hear what other couples have said and I get a little glimpse into their lives as well.  It is an amazing technology.

Personally, I am thankful that for my family, my friends and that I get to live in such a beautiful area and get to do what I love!  My wish is that everyone have a safe holiday and have much to be thankful for.
Posted by Destin Notary / Officiant at 6:05 PM No comments:

This time change... falling back an hour... really affects our sunset weddings.  Instead of having the weddings at 5:00 pm, we now have to have them at 4:00 pm.  Late afternoon now becomes our evening sunset time.

Posted by Destin Notary / Officiant at 4:11 PM No comments:

A groom in uniform

Last night I had the privilege of officiating at a wedding for a young military couple.  The groom and the groomsmen looked very impressive in their dress blues and the bride and her bridesmaids were beautiful. 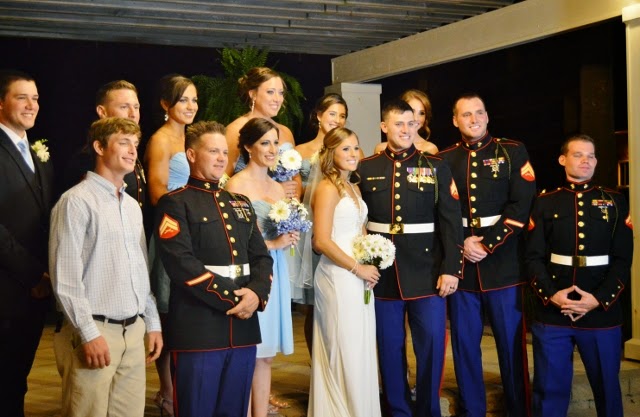 Just seeing those young men in their uniforms brought a tear to most people's eyes and I was very happy to be part of their big day. 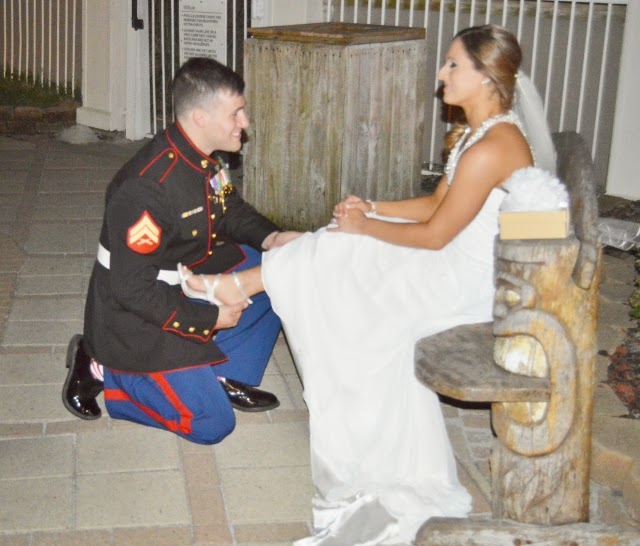 
Posted by Destin Notary / Officiant at 10:22 AM No comments:

What is your story?

I have done many, many weddings and almost every wedding has a story to tell.  The obvious stories that people tell is how they met, when they started dating, when they decided to get married... did he pop the question, did she?  ... those are the stories leading up to the wedding.
Unfortunately, people think the wedding should go perfectly and that things won't go wrong or glitches won't happen.... they do.  And that gives you your wedding story! Every wedding needs a story.
I'll tell you a few stories that I have encountered while doing weddings.
Forgotten marriage license.... there has been more than one wedding when I meet the bride and/or groom prior to the ceremony to finalize the paperwork, when they realize that they don't have the marriage license.  It has been left at their hotel room, it has been in the parents cars.
No marriage license... I have had couples come into town prior to the ceremony only to realize that it is a government holiday and the courthouse is closed and they can't get their marriage license until after the date they planned on getting married.  I have done wedding ceremonies for their friends and families, and then met with them after they get license and do the legal  "I do's".
No rings... there has been more than once where the rings are not where they are supposed to be.  Some have been forgotten back home or back at the hotel.  Sometimes we have used other rings, other times we have done the ceremony without the rings, faking a ring exchange.
Missing people.... there have been times where key people in the ceremony were not able to be there.
Weather... oh my goodness.... planning a wedding on the beach, you have to have a backup plan, just i in case of inclement weather.  I have done weddings on balconies, in living rooms, and even once in the car due to rainy weather.  I have done weddings where we under umbrellas.  If it is rain, I don't mind, but I won't go out on the beach if there is lightning in the area.
Wind.... something to keep in mind, if you are having an arbor on the beach.  If you put a lot of tulle on it, it could act like an kite and blow over.  I have had to have grooms hold on to the arbor to make sure it didn't blow away or fall down on us.
Recently, there was an incident where the maid of honor and bridesmaid had a car accident at the end of the street where the wedding was happening.  Thankfully everyone was ok and not injured, but it did make for a story for their wedding... remember when....
For anyone that knows me personally... we won't even begin to talk about the stories (yes, plural) that happened at my wedding.
So what is your story?
Posted by Destin Notary / Officiant at 8:08 PM No comments:

The summer is over and the second wedding season on the Gulf Coast is starting up.  We have had a gorgeous summer.  The first wedding season here is from March through the middle of July.  Then the heat and humidity set in and the weddings slow down.  September through November is another big wedding time here as the heat is gone and so are the tourists.  The area is much less crowded and the weather is still wonderful.
I have heard a few folks in the wedding biz around here talking about starting up second businesses in the south part of Florida for the winter time when it is cooler here and warmer there.  Sounds like an interesting proposition.  I will have to look into that as well.  Wouldn't that be a nice change?  To go further south from December to March and enjoy their scenery, while still working the wedding biz and then come back up here for the summer.
If you think outside of the box, there are endless possibilities. :-)

Posted by Destin Notary / Officiant at 11:47 AM No comments:

It is that time of year again here on the Emerald Coast.... spring break.  The college students have invaded our area once again.  This will be a familiar site for us locals for the next 5-6 weeks as the colleges let out and the kids let loose.
The sheriff's department is out in force and have made many arrests for underage drinking so far.  The legal drinking age is 21 and I would dare say that the majority of those out on the beaches are not that old.  Hopefully they will all have safe vacation, enjoy the sunshine and beaches and get back to school in one piece.  A little more tanned and hopefully with some fun stories to tell.


Posted by Destin Notary / Officiant at 5:20 PM No comments: